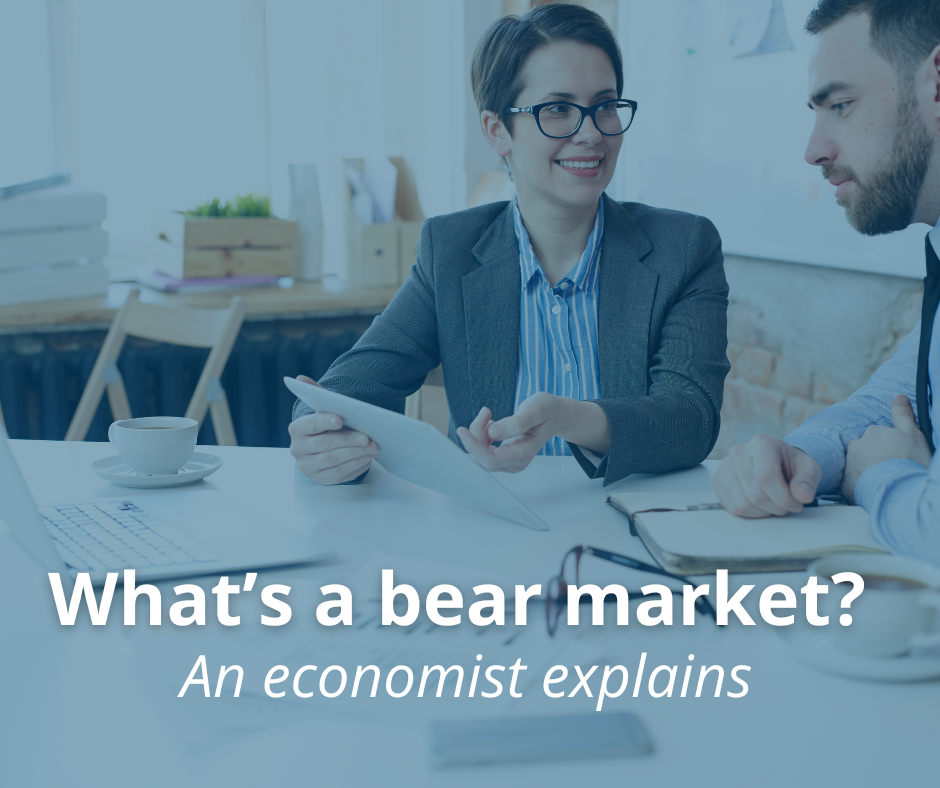 A 16th-century proverb advises: “It’s unwise to sell a bear’s skin before catching it.”

That’s one of the stories used to explain why, in modern times, Wall Street types call someone who sells a stock expecting its price to drop a “bear.” It follows that a market in which securities or commodities are persistently declining in value is known as a “bear market,” like the one U.S. stocks are experiencing now.

The opposite, when assets are steadily rising over a period of time, is a “bull market.”

In my money and banking classes, I teach students about the efficient market hypothesis, which states that stock prices are rational, in that they are always fairly priced based on available information. But when there are big swings in the stock market, it’s hard for my students and others to resist using more emotive terms like “bulls” and “bears,” which call to mind the “animal spirits” of investing.

So how do you know when you’re in a bear market?

The Securities and Exchange Control Commission defines a bear market as a period of at least two months when a broad market – measured by an index such as the S&P 500 – falls by 20% or more. When it rises by 20% or more over two months or more, it is a bull market.

Not everyone strictly follows this two-month rule. For example, in March 2020, when the S&P 500 plunged 34% in a matter of weeks due to the onset of the COVID-19 pandemic, many analysts still called it a “bear market.”

There have been fewer distinct bull markets, with 24 in that period. They tend to last a lot longer, though, often for multiple years.

Why a bear market matters

A bear market may signal a recession is coming, though it’s not a perfect correlation. Since World War II, there have been three bear markets – out of a total of 12 – that didn’t precede a recession.

A bear market is bad news for anyone with a stock investment, whether it’s a direct stake in Apple or Walmart or a 401(k).

The impact is particularly hard on recent retirees, who are seeing their nest eggs shrink just as they need to start withdrawing income from them.

In addition, entering a bear market can have a psychological impact on investors, creating a self- fulfilling cycle. Perceiving a bear market tends to prompt investors to sell even more, thus pushing prices down further and prolonging the pain.

Vidhura S Tennekoon does not work for, consult, own shares in or receive funding from any company or organization that would benefit from this article, and has disclosed no relevant affiliations beyond their academic appointment.

Indiana University provides funding as a member of The Conversation US.

The opinions voiced in this material are for general information only and are not intended to provide specific advice or recommendations for any individual.

Investing involves risks including possible loss of principal. No investment strategy or risk management technique can guarantee return or eliminate risk in all market environments.

Past performance is no guarantee of future results.

All information is believed to be from reliable sources; however LPL Financial makes no representation as to its completeness or accuracy.

This article was prepared by RSW Publishing.

RSW Publishing has an agreement to republish this author's content.